This is not a new subject but it is one that continues to both amaze and frustrate me in equal measure.

Driving around Nairobi I am constantly confronted by examples of billboard executions, for a multitude of different brands, that are completely ineffective.

So many of the executions disregard the absolute basics of billboard advertising and completely miss the point that despite the state of the Nairobi traffic most of them are viewed when on the move.

Too often you see billboards that have too many messages, have too small a font (and I know my eye sight is going at an alarming rate but even with 2020 vision you are pushed to make out the minute detail on many of these executions) or have no visual stand out. This is all just execution without even looking at the creative idea itself.

Obviously without a good creative idea that can connect on both a rational and emotional level then you are going to struggle to create good advertising, regardless of how you execute, but you can kill the best creative idea through poor execution.

Billboards should be a quick burst of essential information, additional messages only dilute the impact – in this case less is definitely more! If a campaign requires multiple messages then deliver them over multiple executions.

We see so many examples of advertising, which look like they were designed for print media (where the audience has more time to understand & absorb messages) and then just slapped on a billboard.  They are starting from the wrong point, as David Berstein said, “solve the creative brief on a poster and you’ll have an idea that will work in virtually any medium”.

Below are a couple of examples that in my opinion got it right, one international & one local. Both are very simple yet say so much with so little words.

As an interesting aside, which shows the power of good branding & advertising. Heinz ketchup has an 80% share in the UK ketchup market yet in a blind consumer taste test with 12 other brands it rated joint second bottom in terms of taste. Source: Which? 2011

So good advertising and execution does make a difference. 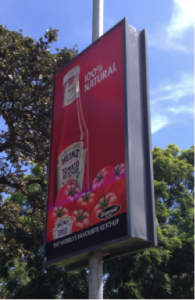