As we probably all know by now, Facebook will be changing its news feed algorithm to prioritize content from “friends, family and groups.” This means less public content like posts from businesses, brands, and media. And the public content you see more will be held to a standard—it should encourage meaningful interactions between people.” The below video from Facebook aims to explain some of these changes.

From a business and agency point of view, this means that we are going to have to work harder than ever to gain customers’ attention on the platform.

For many news organizations this was a confirmation of what they had already been experiencing. Over the past three months, some publishers say that they have seen a steady drop off in Facebook’s referred traffic, some sites by more than 40%, while others are worried that a bigger drop is coming. The analytics site Parse.ly noted in December that overall Facebook traffic referrals were down, to about 26% from 40% over the year, while Google’s was growing. Mark Zuckerberg, as many other writers have noted, is changing his relationship status with publishers.

The question to answer therefore becomes; how should we ensure our engagement levels are not adversely affected?

Solution: This means brands should create quality content focused on sparking conversations between users. Try including questions in your posts, or write about timely, relevant topics that users are sure to have an opinion on. The point is, users will be more likely to see your Facebook posts if their friends and family are commenting on it.

Solution: Make this a part of your posts. Encourage users to click on the SEE FIRST option to ensure your page content hits their timelines.  See below screenshot on where to find this option: 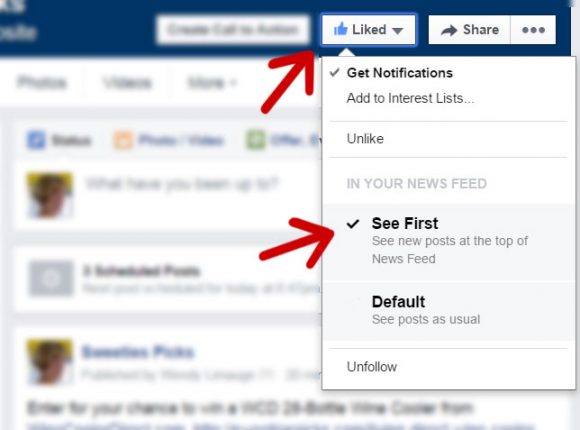 Solution: Research on how to better leverage on advertising tools and options to reaching not more, but a better, more engaged audience is key. Learning the new rules of advertising may take time, but if done right, can achieve the same desired results as before.

NOTE: Videos are still favored under the new algorithm, but live videos will be even more important. In his announcement, Zuckerberg wrote that “live videos often lead to discussion among viewers on Facebook—in fact, live videos on average get six times as many interactions as regular videos.”

In conclusion, from an agency point of view, it’s too early to determine the effect Facebook’s algorithm change will have on paid media. Its however important to note that while the move could hurt brands, businesses and publishers, and maybe even Facebook’s short-term growth, it’s a move that will benefit the social network in the long-term.

Facebook wants a more attractive platform for its users that is not only used more often, but more trusted. We’re able to advertise in this space and it’s a good thing for us. If your brand’s relationship with its audience is strong, and your content relevant, you’ll not only survive the change but you should prosper.

*Comments and ideas have been adapted from various online sources*