Once again here is my brief look at Kenyan companies performance in the “Africa’s Top 250 Companies, African Business Annual Ranking”.

Last year many of the Kenyan companies rose in the rankings, this year however we have seen the majority have declined, although non have disappeared completely from the list. 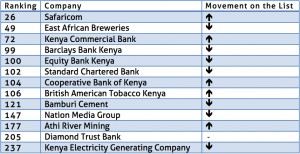 As with previous years Safaricom tops the list of Kenyan companies with the rest of the group being dominated by the formal banking sector. This is further reinforced in 2014 with the only 1 new addition to the list being Diamond Trust Bank.

The number of East African companies listed in total has declined from 20 to 19, of which 13 are from Kenya, demonstrating that despite some of the problems Kenya has been facing in the last few years it is still the dominant player in East Africa.

The continued prominence of the banking sector may also be an indicator of the banks willingness to adapt their services. As recently as 10 years ago, formal banking was the preserve of the rich. However mobile banking and the opening of the sector to people of lower incomes has seen an increase in the number of banked clients.

Allied to this is the fact that the cost of banking and in particular the cost of borrowing is still amongst the highest in the world. A recent report from TheBanker on the Top 1000 World Banks indicates that African banks generate profit at twice the rate of the global average. Perhaps this explains why banks are doing so well on Africa’s list of top 250 African companies.